Club América vs. Tigres and Chivas de Guadalajara vs. Rayados 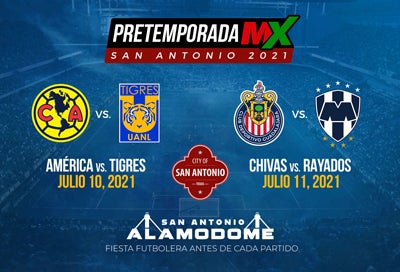 As part of their pre-season, four of Liga MX’s most powerful teams in recent years will make history by playing in the same U.S. city on the same weekend. Various initiatives will take place around this exciting soccer celebration in the city of San Antonio.

There will be a Fan Fest taking place outside the stadium four hours prior to each game consisting of live music, food, team mascot, championship trophies and much more.

Tickets for both games will go on sale on Thursday, May 27that 10:00 a.m. CST and will be available at the stadium’s box office and ticketmaster.

For press credentials for either game, please visit http://bit.ly/PretemporadaMXand select the desired game. For any other media-related questions, please send an e-mail to media@ptimesports.com.